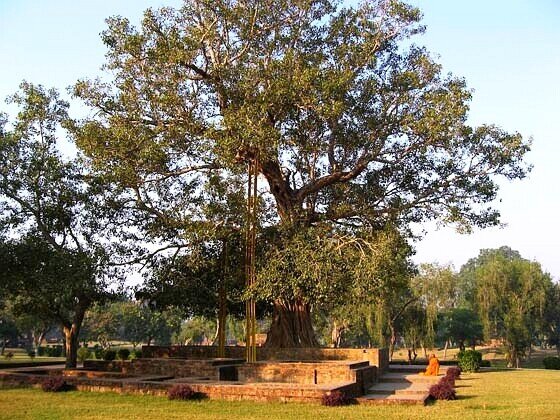 Jetavana Gardens with the original name as Jetavane Anathapindikassa Arama which means Jeta Grove Anathapindikassa Monastery, was built to offer to Buddha as a retreat center and resident by Anathapindika and Jetakumara. Jetavana is located just outside the old city of Shravasti. During Buddha’s lifetime Jetavana, where the Enlightened One performed the great miracles, had been one of the most esteemed of the monasteries in India. Shakyamuni spent 19 (out of 45) rainy-seasons at Jetavana, more than any other monastery.

The below quotation from The Karandavyuha Sutra (a Mahayana sutra c400CE) mentions the Jeta Grove (ie the Jetavana):

When the Buddha accepted in Rajgir the merchant Anathapindika’s invitation to spend the second rainy season at Shravasti, it was on the condition that proper facilities for all his monks would be available. Anathapindika and Sariputra examined the area and found only the park of Prince Jeta to be suitable for such a large assembly of monks. However, the prince was unwilling to part with it for less than the number of gold coins that would cover the area. Undismayed, the merchant proceeded to cover all the ground with gold coins. When but a small portion remained uncovered, the prince asked him to desist and announced that he himself would build a vihara on the spot, some say using the gold he had received for the purpose. The merchant also built a vihara, as did King Prasenajit later. These were the principal buildings used by the Buddha on his first visit to Shravasti. The park with its buildings became known as Jetavana Grove.

Hsuan Chwang states that during its most magnificent period, Jetavana had temples, meditation halls, monks’ chambers, bathing places, a hospital, pleasantly shaded tanks and a well-stocked library with reading rooms. It was altogether an ideal place for practising the Buddha’s teachings, many of which were first given here.

One of the first statues of Shakyamuni originated at Jetavana. Ordered by King Prasenajit, it was made of hardwood. King Prasenajit placed it at his seat in the vihara. Fa Hien tells that when Shakyamuni next visited Jetavana, the statue came out to meet him. He told it to return to its place, saying that it would serve as a model for others after his passing away. The Jetavana vihara which housed this image was once an elaborate seven-storied building. It eventually burned down but the image survived and a two-storied structure was built in its place. At the time of Hsuan Chwang the statue was kept in a brick shrine.

Ananda once asked Buddha to allow a tree to be planted at Jetavana because when the Buddha was not present at Jetavana his followers had nowhere to place their offerings of flowers and so forth. Maudgalyayana brought a seed of the bodhi tree and when the tree grew the Buddha is said to have blessed it by spending one night meditating under it. This is now known as the Ananda bodhi tree.

The Chinese pilgrims mention a number of stupas in the park commemorating various events. One marked the occasion when the Buddha found a sick monk unattended and languishing in his own filth. Shakyamuni bathed and nursed the monk himself and exhorted the other monks to care for each other similarly in the future. Another stupa marked the spot where some non-buddhists, wanting to defame the Buddha, murdered a woman and left her body behind the monastery. Others marked the places where Shakyamuni walked and sat.

When Ashoka visited Jetavana he erected a great pillar on either side of the eastern gate, the left surmounted by a wheel and the right by an ox. Near the monastery and beside the well used by the Buddha, he built a stupa enshrining a relic. It is taught that this was one of the mahavihara’s most flourishing periods, after which it was somewhat neglected. However, archaeological evidence has shown a revival during the Kushan period of the first century and much reconstruction. Later, during the Gupta period, even when brahmanism was once again ascendent, Jetavana received new support. Many of the present ruins show the styles and ornaments of the Guptas.

Fa Hien found decay evident but was welcomed by resident monks, who were astonished to see a brother from the land of Han. Two centuries later Hsuan Chwang found the place deserted, but soon after his visit another revival occurred, as evidenced by the traces and images from the eighth and ninth centuries that remain. As in other places, the monastic tradition persisted here well into the twelfth century, when the muslim invasions became overpowering. Records show that Vidhyadhara, a minister to King Madanapala of Kanouj, built a vihara in 1119. An inscribed copper plate dated at 1130 found amongst the ruins states that the former king’s son Govindacauda made a gift of six villages to Buddhabhattoraka and the monks of Jetavana.

The Jetavana Grove was a short distance south of the prosperous city of Shravasti, the capital of Koshala, which stood on the banks of the Achiravati River. Here Prasenajit had his palace, and close to it built a monastery. Nearby was the vihara of Mahaprajapati, who was Shakyamuni’s stepmother and the first woman admitted to the Order. A short distance away is a large, ruined stupa marking the place where Angulimala the murderer attained arhatship and where his body was later cremated. Outside the city was a forest where once lived a community of 500 blind men, all of whom regained their sight when the Buddha came and preached to them.