The meaning of stupas

“Stupas… demonstrate the triumph of enlightenment’s wisdom over suffering’s ignorance. They are memorials… to the possibility of freedom from suffering for all beings. They signal the triumphal reality of a nature that enables beings to evolve to experience the ultimate fulfilment of perfect bliss, beyond death and unsatisfying life. Stupas stand as eloquent testimony to the higher purpose of life, beyond competing or struggling, getting or spending. Consciously or subliminally, they help turn people’s minds away from their frustrating obsessions and towards their own higher potential” Professor Robert Thurman, from the Foreword to Buddhist Stupas in Asia: The Shape of Perfection.

The stupa is a Sanskrit word that means “to heap” or “to pile up” and refers to the mound-like shape of the earliest stupas.

The Mahaparinirvana Sutra tells us that it was the Buddha himself who outlined the basic design of the stupa. The story begins at Buddha’s deathbed. When he realized that death was imminent, Buddha gave instructions about the disposition of his body. He said that his body should be cremated and the relics divided up and enclosed in four different monuments. These monuments were to be erected at the following places, marking important milestones in the Buddha’s spiritual journey: at Lumbini, where he was born; at Bodhgaya where he attained Enlightenment; at Sarnath, where he gave his first teaching; and at Kushinagar, where he died, entering parinirvana, or ultimate liberation.

Giving a practical demonstration, he folded his outer yellow robe over and over until it became a rough cube. Then he put his begging bowl over it. These two elements, the square and the dome, are present in every stupa (India), dagoba (Sri Lanka), chorten (Tibet), chedi or pagoda (Burma), t’ap (Korea), ta (China), tarp (Vietnam), thaat (Laos), sotoba (Japan), or chandi (Java).

The stupa, universal throughout Asia, evolved into more than a reliquary monument. It has become an expression of the ideal of Enlightenment. Statues represent the Buddha’s body, Dharma texts his speech. Stupas are representations of the Buddha’s mind. They reveal the path to enlightenment, or how the mind can actualize its full potential and be transformed into enlightenment. Stupas can be seen as an expression of the five elements. 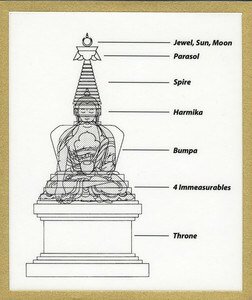 The base represents ethics; the abandonment of the ten non-virtues of body, speech and mind – the foundation of the Path. Upon this foundation, the practice that leads to Enlightenment is built. Above the base is the throne, upon which the actual stupa will be placed. Above the throne are four steps – the four mindfulnesses, the four perfect efforts, the four miraculous feats, and the five powers. The base of the vase is the five forces.

The dome or vase represents the seven aspects of Enlightenment; where the actual Buddha is situated, it represents the celestial mansion of enlightened beings. The harmika, or cube is the peak of all previous attainments. It is where one enters the path of the superior beings, and is the point in the path are one first directly realises selflessness or emptiness. Stupas in Nepal have eyes painted on the harmika to emphasise this crucial moment of perception.

The base is ethics, the dome and harmika are the path. Beyond this begins the result – the conical spire, where wisdom burns away the residue of ignorance. The thirteen rings symbolise the ten powers (or bhumis), and the three close mindfulnesses of the Buddha.

Above the spire is an umbrella, which represents the Buddha’s great compassion, protecting us from suffering just as an umbrella protects us from the sun and rain.

Above the umbrella are the moon and the sun, and these two represent bodhichitta – the altruistic intention to bring all beings out of suffering and into the bliss of enlightenment. There are two types of bodhichitta, conventional and ultimate. The moon symbolizes conventional bodhichitta and the sun ultimate bodhichitta. Above the sun is the jewel – the final result, Enlightenment, or Buddhahood.

So, on the foundation, free of the ten non-virtues, one trains on the path and then finally attains Enlightenment – as the Buddha did. 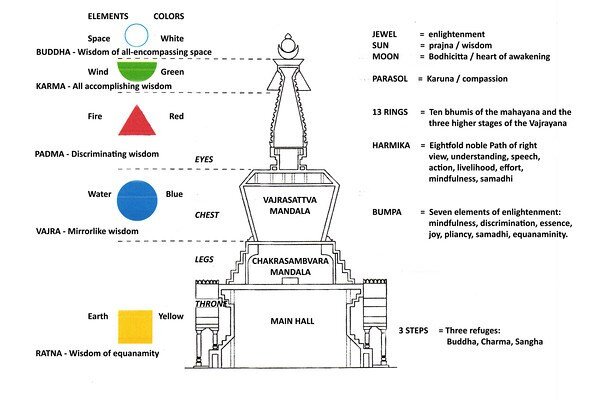 The entire stupa represents the ultimate qualities of the Buddha’s mind and is therefore a very precious and holy object. By making offerings, prostrations, circumambulating – and especially by giving donations to help build a stupa, a huge amount of virtue or merit is received that will help one to train in the path and which becomes a cause for the quick attainment of Enlightenment.

“Ten Traditional Purposes of Stupas”, extracted from A Stupa for Geshe Lama Konchog by Tenzin Zopa.

“When a great teacher passes away, his body is no more, but to indicate that his mind is dwelling forever in an unchanging way in the dharmakaya, one will erect a stupa as a symbol of the mind of the buddhas” – HH Dilgo Khyentse Rinpoche

Circumambulating the Stupa, says: ‘By circumambulating stupas one avoids being born in the naraks, as a preta, an animal, a barbarian, a long-life god, a heretic, a fool or in a place where Buddha has not descended. One receives a deva or human body and one has a long life. One is not harmed by pretas, cannibals or other creatures. For hundreds of eons one is not born blind or crippled with arthritis. By circumambulating stupas one receives perfect power and perseverance. Because there is no laziness one is able to develop the mind quickly. One receives the six clairvoyances. One also becomes an arhat having abandoned all delusion and possessing great psychic power. Finally one achieves the golden ‘holy body of Buddha adorned with the holy signs.’

Many other benefits are mentioned in the “Sutra of the Compassionate-eyed One” and “Advice to King Sagyal” which says: ‘If a person circumambulates with devotion a stupa or statue of Buddha, in their future lives their enemies will respect and surrender to them. They will become a person of quality respected by and pleasing to other people. The temporal and ultimate benefits are infinite. Circumambulation is the supreme method to purify obscurations and close the door to the lower realms.’

A stupa filled with the four powerful mantras called the relics of dharmakaya is very powerful. The wind that touches such a stupa and then touches animals or human beings, purifies their negative karma to be born in the lower realms. If the dust from a stupa touches beings, it purifies them. Circumambulating holy objects purifies broken pratimoksha vows, the five uninterrupted negative karmas and all the karmas to be born in the naraks.

Circumambulating is a very powerful practice and the very root of the practice is to circumambulate with strong devotion and with an undistracted mind. Since we need to accumulate extensive merit in order to generate realisation and achieve enlightenment quickly, we should attempt to circumambulate as perfectly as possible. Circumambulations should be done with body, speech and mind. There is no great benefit if your mind is distracted and you are gossiping while you are circumambulating.

“The visual impact of the stupa on the observer brings a direct experience of inherent wakefulness and dignity. Stupas continue to be built because of their ability to liberate one simply upon seeing their structure” – Chogyam Trungpa Rinpoche

I think it would be very beneficial for anyone with a disease that is difficult to cure or incurable such as AIDS or cancer to circumambulate a stupa several hundred times a day. This is my personal suggestion. Since depending on these holy objects purifies the cause of the disease it has to have an effect on the disease.

Before starting, generate a strong motivation of Bodhicitta remembering the suffering of the beings in the six realms and feel that you are responsible for freeing them from their suffering. To multiply the effect of the circumambulation by 1,000 times say once the mantra:

While circumambulating you can also practice rejoicing in your own three times merits and those of all other sentient beings, Bodhisattvas and Buddhas.

“The stupa is a monument of peace, harmony and love. It symbolizes the essence of the five elements and the qualities of an awakened mind with the qualities of unlimited compassion and deepest wisdom. It contains many Buddhist scriptures and prayers and is built for world peace. The stupa in the garden of the Bodhicharya centre for Peace and Understanding in Berlin will sustain the outer balance, inner peace and all-encompassing love.” Ringu Tulku Rinpoche

The circle or wheelOne of the early sutras (a collection of sayings attributed to the Buddha forming a religious text) records that the Buddha gave specific directions regarding the appropriate method of honoring his remains (the Maha-parinibbāna sutra): his ashes were to be buried in a stupa at the crossing of the mythical four great roads (the four directions of space), the unmoving hub of the wheel, the place of Enlightenment.If one thinks of the stupa as a circle or wheel, the unmoving center symbolizes Enlightenment. Likewise, the practitioner achieves stillness and peace when the Buddhist dharma is fully understood. Many stupas are placed on a square base, and the four sides represent the four directions, north, south, east and west. Each side often has a gate in the center, which allows the practitioner to enter from any side. The gates are called torana. Each gate also represents the four great life events of the Buddha: East (Buddha’s birth), South (Enlightenment), West (First Sermon where he preached his teachings or dharma), and North (Nirvana). The gates are turned at right angles to the axis mundi to indicate movement in the manner of the arms of a svastika, a directional symbol that, in Sanskrit, means “to be good” (“su” means good or auspicious and “asti” means to be). The torana are directional gates guiding the practitioner in the correct direction on the correct path to Enlightenment, the understanding of the Four Noble Truths.

A microcosm of the universeAt the top of stupa is a yasti, or spire, which symbolizes the axis mundi (a line through the earth’s center around which the universe is thought to revolve). The yasti is surrounded by a harmika, a gate or fence, and is topped by chattras(umbrella-like objects symbolizing royalty and protection).The stupa makes visible something that is so large as to be unimaginable. The axis symbolizes the center of the cosmos partitioning the world into six directions: north, south, east, west, the nadir and the zenith. This central axis, the axis mundi, is echoed in the same axis that bisects the human body. In this manner, the human body also functions as a microcosm of the universe. The spinal column is the axis that bisects Mt. Meru (the sacred mountain at the center of the Buddhist world) and around which the world pivots. The aim of the practitioner is to climb the mountain of one’s own mind, ascending stage by stage through the planes of increasing levels of Enlightenment.

Padmasambhava’s instruction on Offerings to the Stupa

You can purchase stupas during your stay with us at Jetavana Grove. Your contribution will support Stupa Temple of Peace. It is only through your generous support that this long held aspiration of our teachers and lineage masters will be realised.

About the Author: admin